By Gord Colter
In commemeration of the 50th anniversary of the British Invasion (the Beatles coming to America) and the relatively new print release of the Judge Dredd Miniatures Game I decided to create an epic JDMG scenario featuring the Betas (Apollo McHarpy, Conn Lenin, Jorge Harkinson & Jingo Barr) in Mega City One.

At the beginning of the game the Betas are on the steps of the Mega City Multimedia building (a truly impressive structure) having just come out from a meeting about a potential movie deal. They are with their Manager (Brains Peptein), the band’s luggage bot and a British detective Judge assigned to them as protection. Also on the steps are a couple of MC1 Judges holding back the fan mobs and media gathered in front of the building. The Betas are supposed to be escorted to the nearby Gorgon Stadium (home to the Gorgon Gargoyles or their affiliate, an android aeroball team) where they are to put on a concert.

Shots and a concussion grenade targeting the Betas ring out from just inside the shadowed entrance of the MCM building as a hover van and fast car (occupied by criminals intent on abducting the Betas) scream into the plaza in front of the building.

At Gorgon Stadium, the opening act (a band called Abadawn) in progress, turns out to be a band of demonic cabalists determined to literally raise Hell.

In the streets, the Rebels, the local gang, strive to defend their turf from an incursion by the rival Stray Cats. 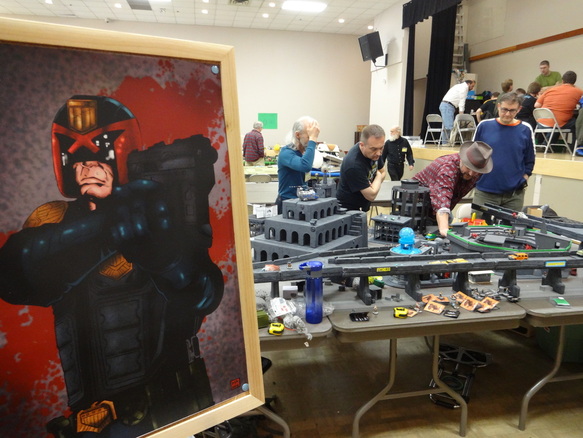 Overview: the game in progress fronted by the Judge's cheery visage. 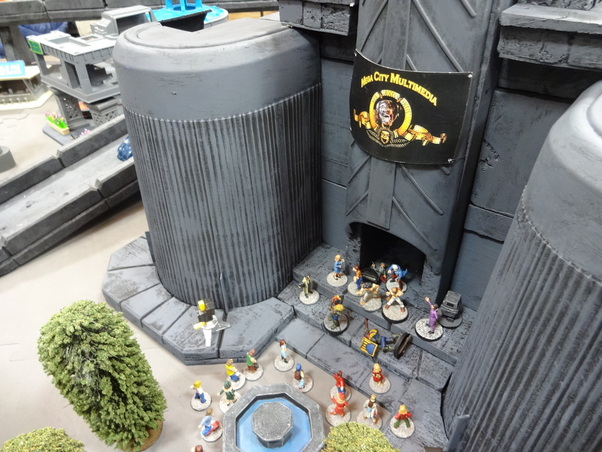 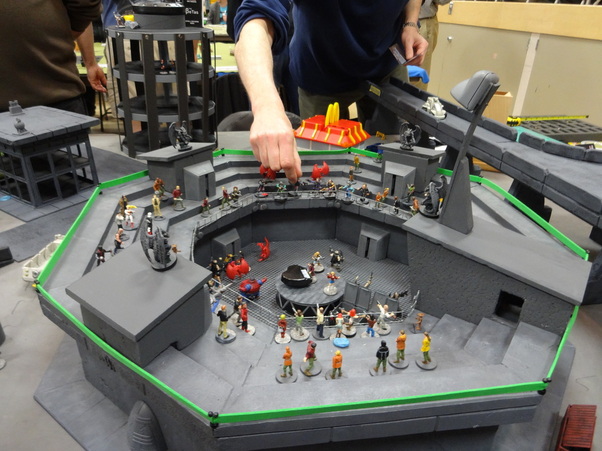 Minor Demons add to the entertainment  at the stadium as Judge Graves arrives to arrest mutant security forces (the Nightbringers) of the opening act – Abadawn. Judge Naylor has already joined the departed. 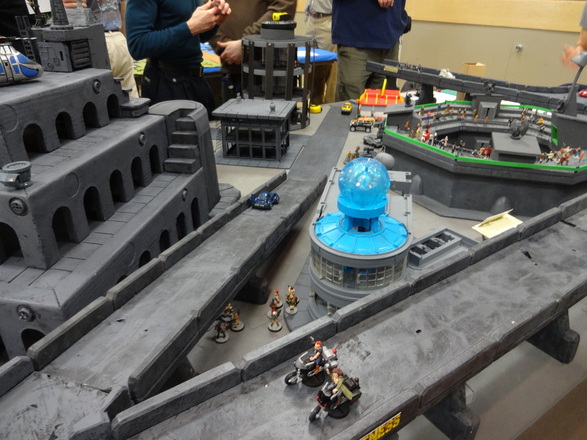 The Stray Cats march in under the overpasses. 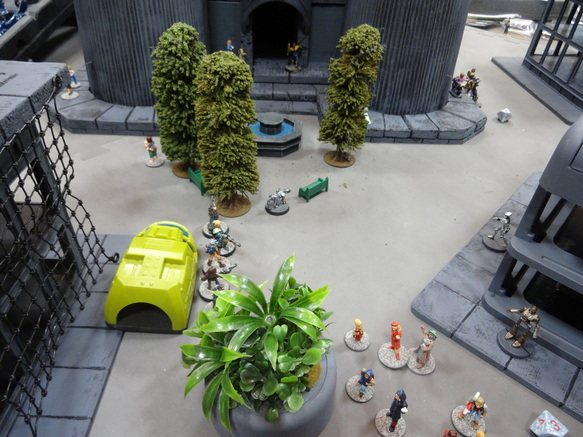 Loco Ohno rides away on her motorcycle, escaping with Conn Lenin. Just beyond Loco, Ringo runs to the safety of two Riot Judges coming on the scene. Some of the would-be abductors are outside their hover van. 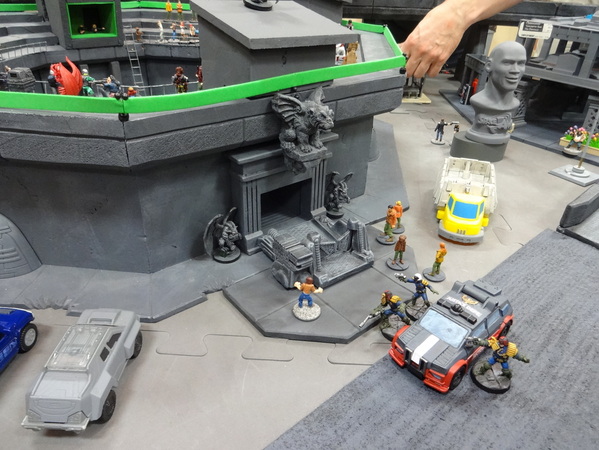 Back-up arrives at the Stadium totally oblivious to Apollo McHarpy (brown shirt) running for the stadium. 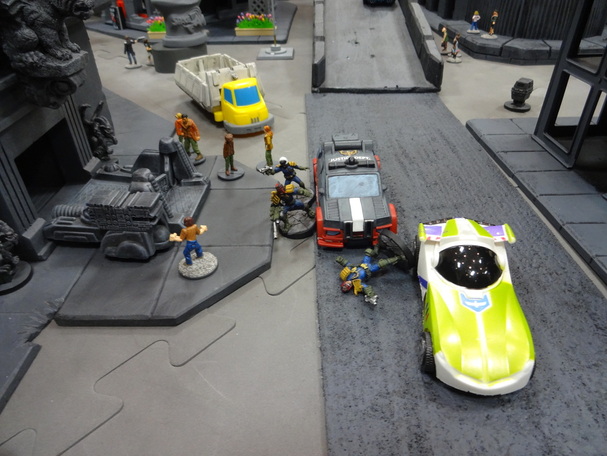 The Judges get no respect as the criminals fast car runs down Judge Jensen. 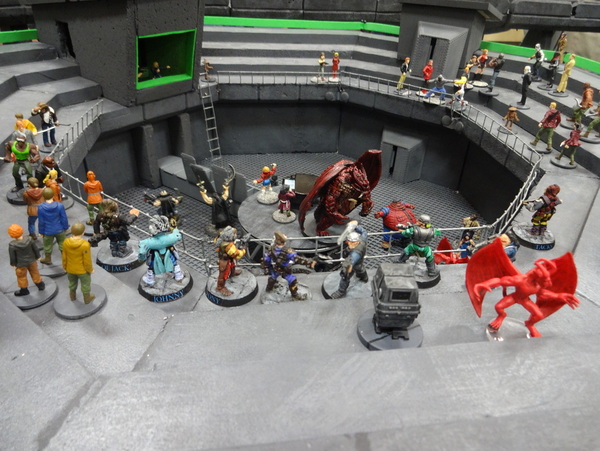 A bigger demon is summoned on stage. 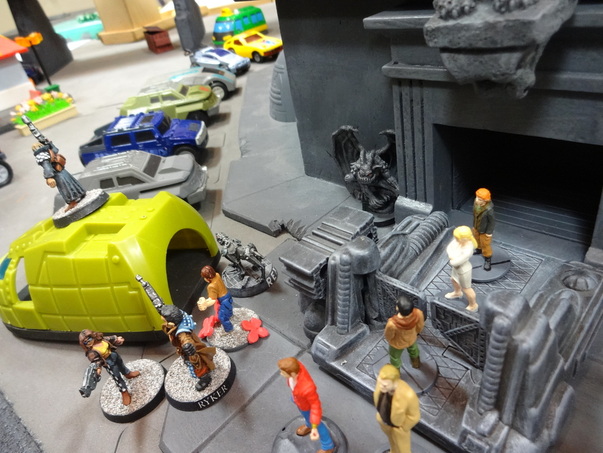 A bleeding Apollo, after being chased down by a robodog, is led into a hover van by criminal leader Ryker. 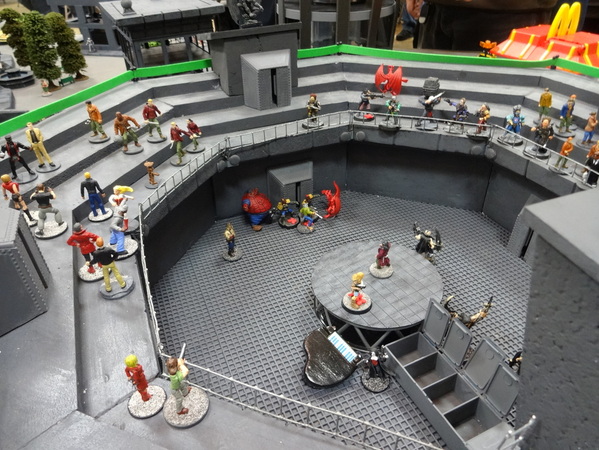 The big demon has been dispatched. Judge Graves faces a demon- possessed fan Fattie while Judge Zeiss spends his last moments with a demon and a band member turned werewolf (in green). 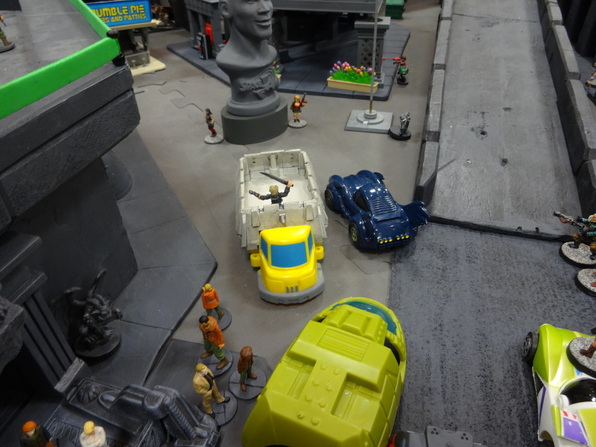 The last Rebel (in a cargo hauler hover) is hunted down by the remaining Stray Cats. The criminal abductors make a getaway with the captured Apollo (in the hover van) while they aim to run down Loco making her way to the stadium. 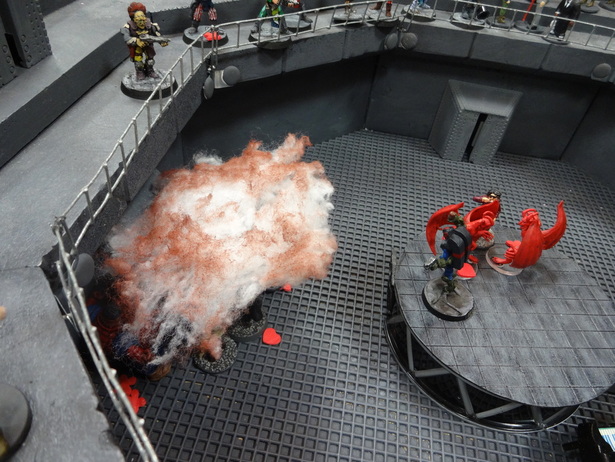 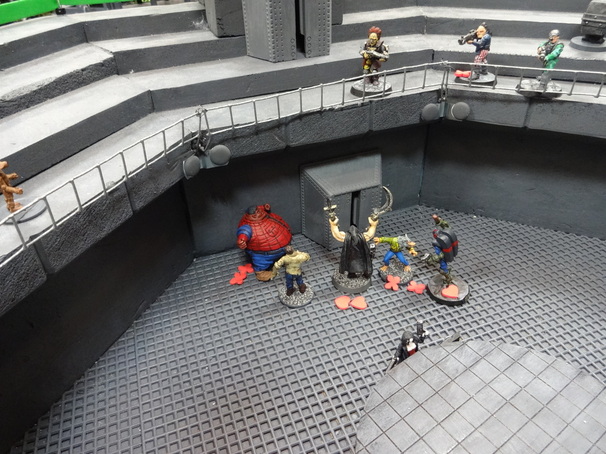 Blood on the floor. A big bad Fattie, a Zombie, a Werewolf & Nightbringer leader Dark Reaper Devereux are about to do in the Flying Judge. Nightbringer Dee Dee Deathmark can be seen by the stage. 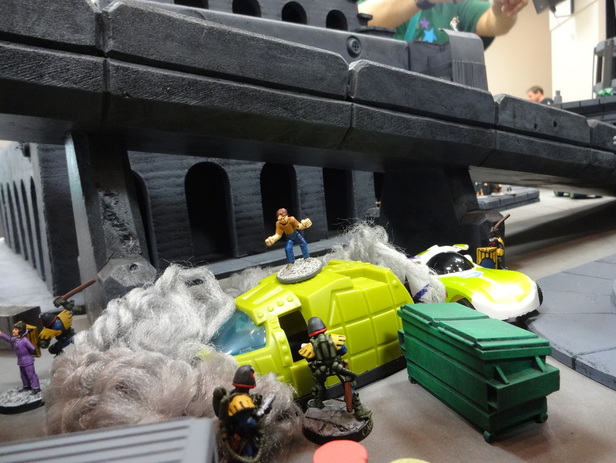 One for the judges. The criminal abductors are taken down by Riot Judges after some astute use of riot foam. 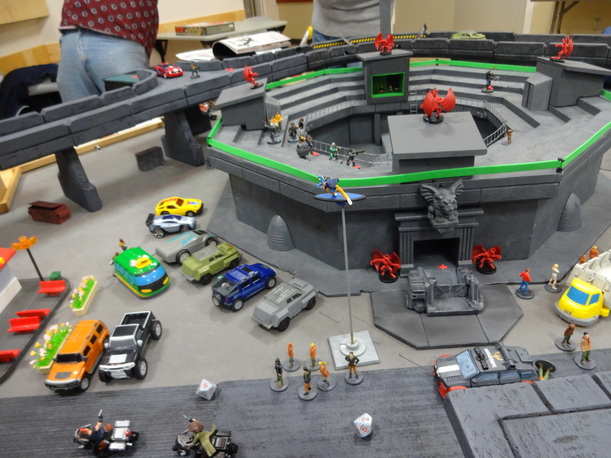 After a block-wide electrostatic discharge the stone gargoyles at Gorgon Stadium animate as minor demons. More judges are on the way in a hover taxi. The skysurfer (centre) later handbombed a Lawmaster Judge out of action and beat a demon in aerial combat. 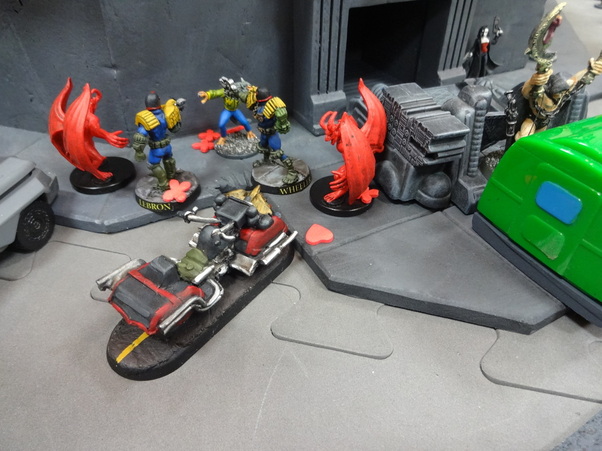 Taking it to the streets. Victorious within, the surviving Nightbringers, Abadawn members and demons take the fight outside the stadium, greeting the last arriving judges. This fight was close but the day/night was won by the dark side.

Post Mortem: All 12 (yes 12!) Judges responding to the action at the Stadium were put out of action - a clear win for the Cabalists & their allies at the Stadium.

Of the 6 Judges attending or reporting to the Betas predicament only a Rookie, on the steps of the MCM building, was put out of action. All of the Betas were saved, though two were bloodied. The criminals narrowly missed escaping with Apollo McHarpy. By the time the Betas were secured all hope was lost at the stadium.

The Stray Cats scrawl war became a war of conquest as they displaced the Rebels from the area.