By Thomas Robson
We set out to host a game of Battle Group Kursk for the club's 40th anniversary, Trumpeters Salute 2013, and chose this scenario because it featured a great mix of units that would work well for a multi-player participation game.

The Death's Head at Andreevka pits a spear-head of the 3rd SS 'Totenkopf' versus elements of the Soviet 36th Guards Separate Heavy Tank Regiment. The SS have crossed the river Psel and invested the village of Andreevka in order to hold the river crossing. The heavy tank regiment, and two platoons of infantry are tasked with clearing the village.

Both sides expect reinforcements; the SS can count on the support of two squadrons of StuG III's  while the Soviets will deploy more armour and are expecting a battery of rocket artillery to smash the fascist defences.... This would be a tough fight for the Soviets! 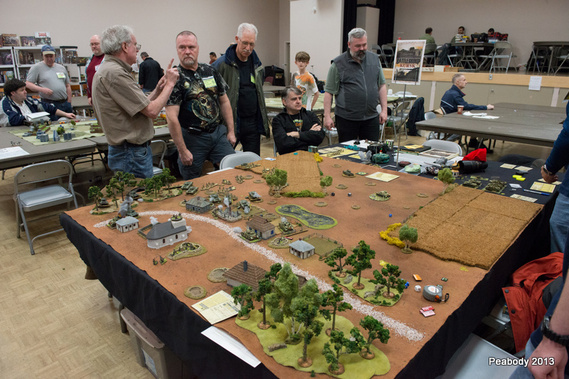 Here is our table set-up, as close as we could manage to the scenario plan on page 210 of the Battle Group Kursk rulebook.
The Village lies at the North end of the board. The Soviets enter from midway up the East side, through the tall crop fields. 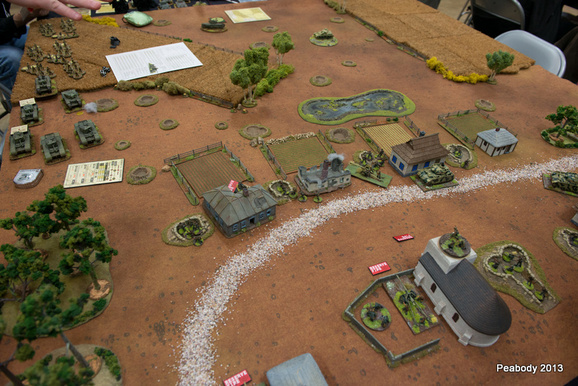 The Germans are well dug in and started this game with five units on Reserve Fire. Two squadrons of Churchills began aggressively moving toward the village; the outlying vehicles screening two squads of tank-riders making a break for the woods.

To the rear, infantry on foot cry 'Urah, Urah!' and surge through the tall crops toward the German trenchline. 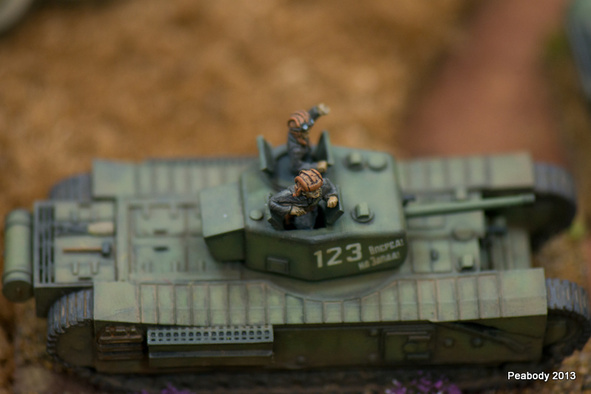 The heroic Guards Tank Regiment members know the main gun of their Churchills have poor high explosive ability, so they pour on the MG's, saving their armour piercing shells for hard targets. 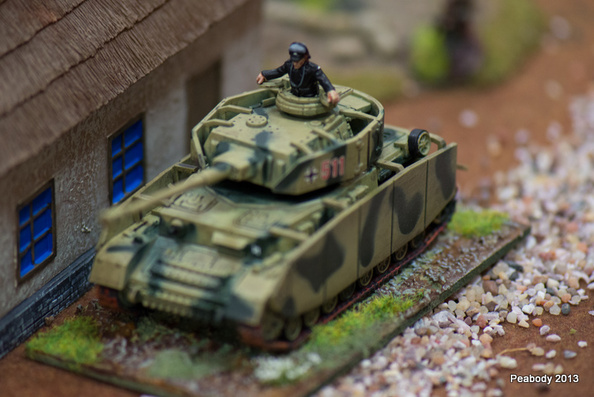 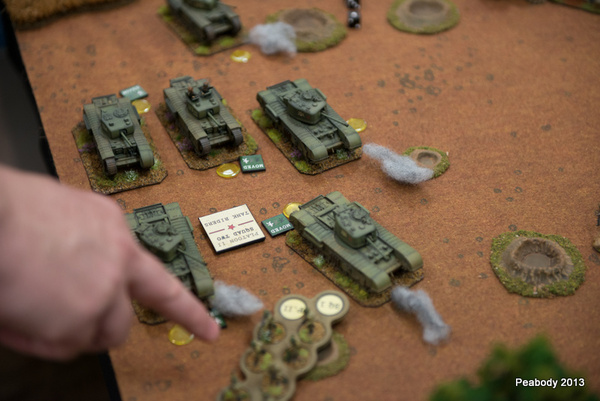 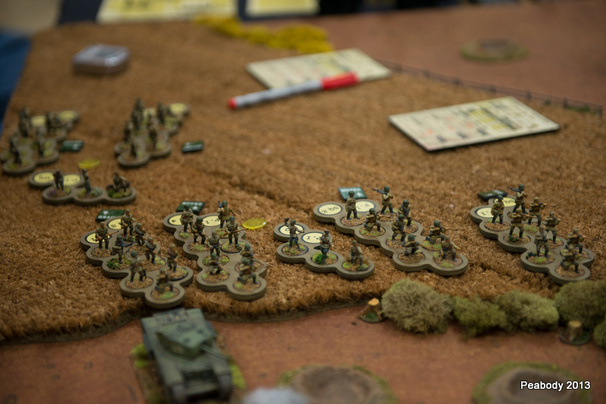 While the tank riders take casualties from German fire, the remaining platoon and a half take positions at the field's edge. 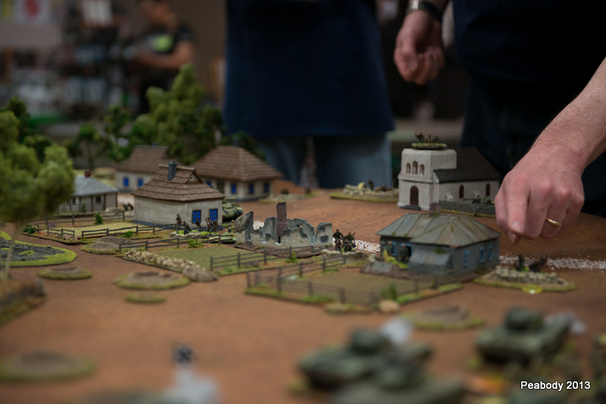 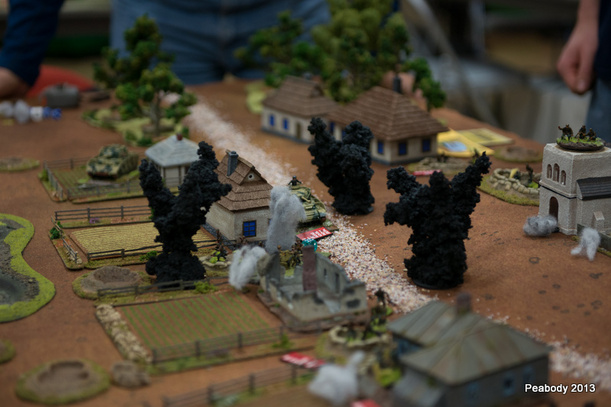 At the start of the next turn Soviet reserves arrive and the artillery observer calls in pounding rocket attacks. German units get pinned opening the way for the Russian's Heavy Tank Regiment. 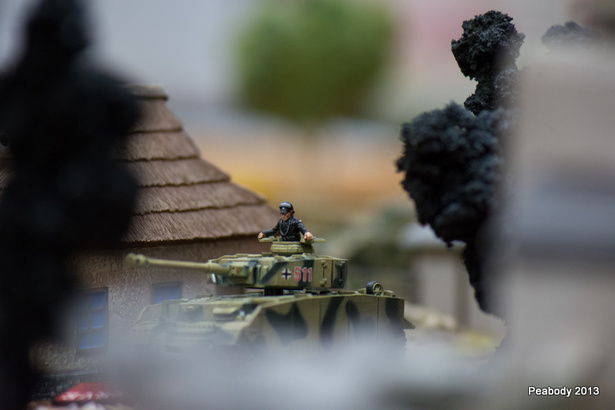 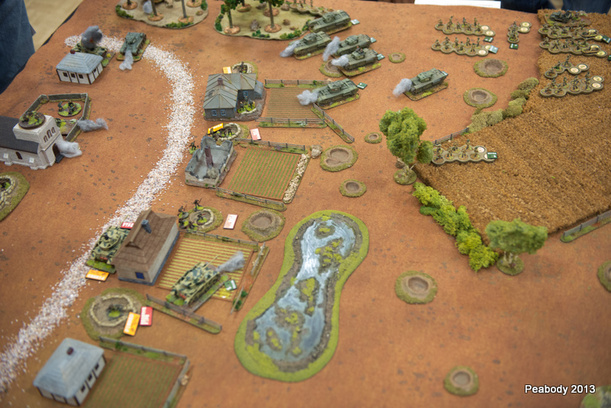 The fox is in the hen-house now, as Soviet SMG squads, supported by the Churchills, begin to make short work of their dug-in enemy. 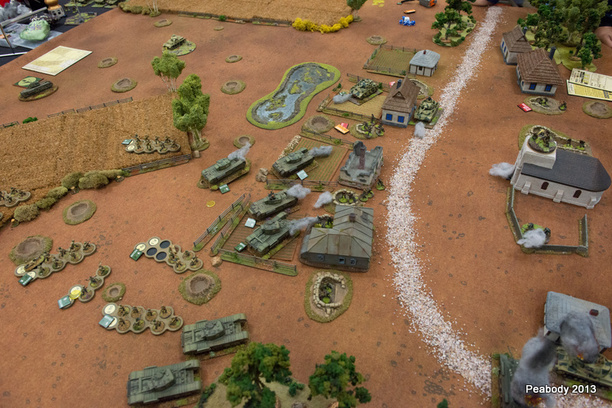 Burning German armour litters the field. And adding insult to injury, the crucial counter-attack by the reserve force of StuG III's fails to materialise. Only ONE StuG III makes it to the table this turn! 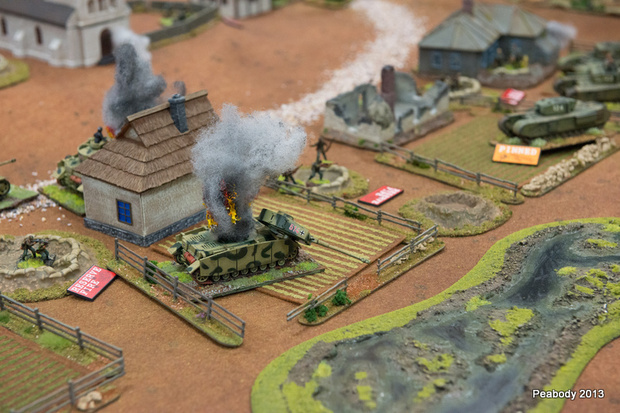 The lone Stug III engages the enemy armour in the eastern woods, but stands no chance of overcoming the horde of Russian tanks still on the table. 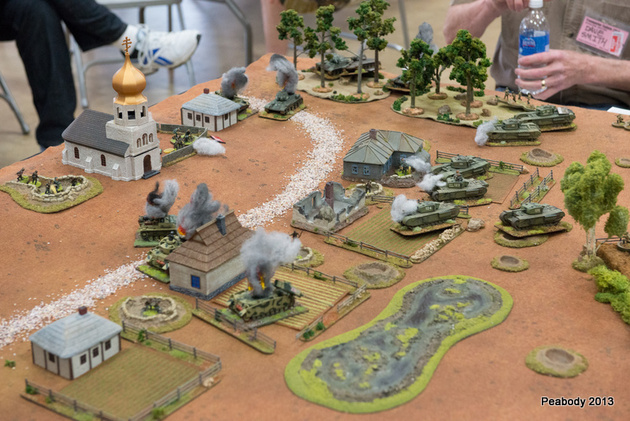 The Russians control the town and there is no active German armour in play. 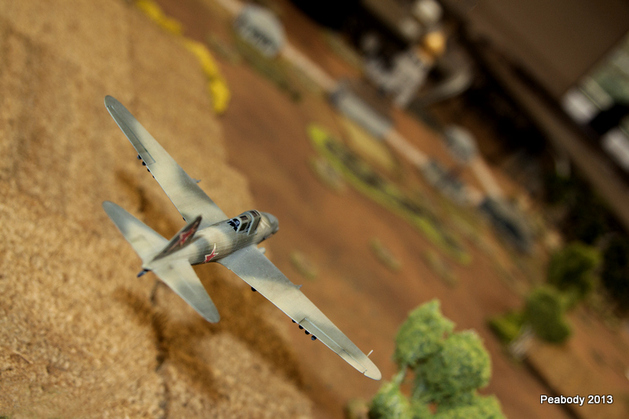 A Sturmovik patrols the fields to the West... Where are the German StuG III's? They keep arriving one-by-one and are easily eliminated. 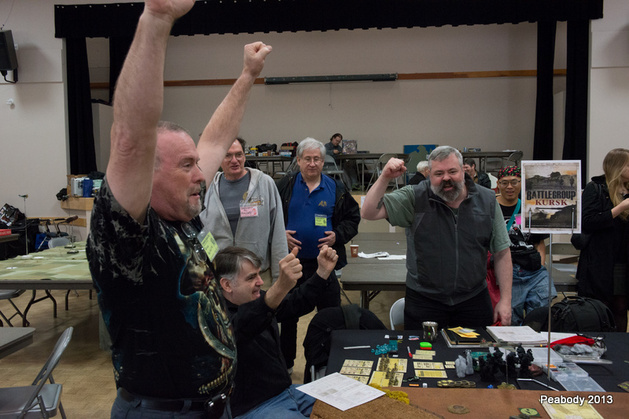 The Katyusha rocket battery reports it is ready to fire again. We are seven turns into the game and the Germans concede that they are only points away from breaking. This is a glorious (and completely unexpected) victory for the Red Army!
Website questions?  Contact: Web Director ​      Trumpeter Society questions/suggestions?  Contact: GamesMaster ​
Powered by