This page was updated: November 12th, 2017.  The rules listed on this page were compiled by the Trumpeter Society's GamesMaster and are games that were registered, played two or more times between June 4th, 2016 and June 2nd, 2017 at Friday Game Nights and/or at Trumpeter Salute convention, and were, or are, commercially available.
In tabletop wargaming you'll discover a staggering selection of rule systems. It's great having so many choices but deciding which rules to use can also be overwhelming. And there is a constant stream of new rules with intriguing game mechanics being published.

Overall, good rules give you the right "feel" for the historic or fictional era you're playing - but are also stream-lined enough to keep games moving. You'll see many newer rules described as "fast-playing".

If possible, it's good to start playing with gamers at a club or hobby store to "kick the tires" on different rules to decide what's fun for you. Naturally, you should also use online reviews and blogs to learn more about rule books before buying. 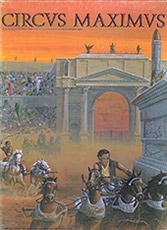 Circus Maximus (Chariot Racing):  A popular game at Trumpeter society events.  Violent and bloody, Circus Maximus details the chariot races that occurred in ancient Rome. Eight teams race around the track three times to determine victory.  Players prepare for the race by selecting the composition of their team of horses, their rider's skills, and the type of chariot that will be driven.  Once the race begins the players are free to do as they wish to hamper the other racers including whipping the rider, ramming chariots with scythed wheels, smashing into horses, and running over crashed opponents.  A campaign game of multiple races, in which players have to manage their teams and can increase their income by betting on races, is also possible. 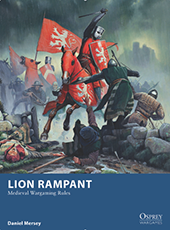 Lion Rampant:  A set of medieval miniature wargaming rules.  The Trumpeter Society plays using 28mm miniatures.  Units consist of 12 foot or 6 mounted miniatures, which are used to fight out skirmish battles between armies of 4-6 units per side (40-60 models per side). Units need to be activated by dice rolls which are easier to pass if you choose orders well suited to that particular troop type.  For example, knights will charge more easily than other troops, and archers are easier to command to shoot rather than charge.  The rules are simple and to some extent they abstract medieval battle in favour of easy game play.  These are popular rules at society events. 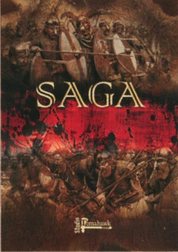 Saga:  These rules are set in the "Dark Ages" and are a skirmish-level game. Players command small "warbands" of Vikings, Saxons, Normans or other forces. Each faction has distinctive historic traits and abilities, and the players face challenging options as they roll special dice and then allocate the dice to grant troops specialized attacks or bonuses. 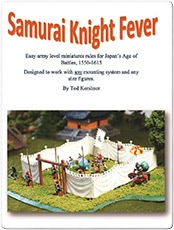 Samurai Knight Fever: Army level rules for Japan’s age of battles 1550-1615. A decent sized game can be completed in 3-4 hours.  Players assume the roles of clan leader, pitting their forces against each other in the land of cherry blossoms.  These rules are available FREE from WargameVault.com:  HERE 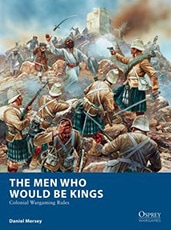 The Men Who Would Be Kings:  The Men Who Would Be Kings is a set of rules designed for fighting historical, or Hollywood, colonial battles in the mid-to late-Nineteenth Century, from the Indian Mutiny (1857) to the Boxer Rebellion (1900).  Gameplay is simple, and driven by the quality of officers leading their units in the true spirit of Victorian derring-do and adventure, where larger than life characters such as the (real) Fred Burnaby and the (fictional) Harry Flashman lead their troops to glory and medals, or to a horrible end at the point of a spear tip. 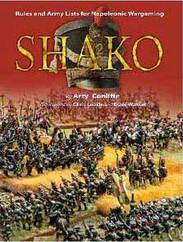 Shako 2:  Co-written by the Trumpeter Society member, Chris Leach, Shako 2 focuses on the Napoleonic Wars. Historic scenarios feature an attacker (usually the Grande Armee) and the defender in set positions. Units generally follow orders in Shako 2 but the tension comes from activation rolls that determine the order of movement every turn. The rules include full army statistics for each power from the Bridge at Lodi to the Battle of Waterloo. 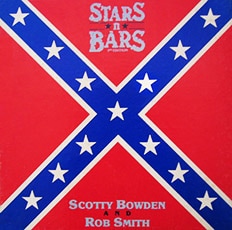 Stars n Bars (1st Edition):  Stars n Bars is a regimental level miniatures game for the American Civil War. The rules emphasize the importance of command and control issues and the balance between tactical and grand tactical thinking on the battlefield. Stars n Bars is simple, accurate and fast play set of rules for the American Civil War.  This rules system is one of the oldest sets of rules in use with the Trumpeter Society despite having being out of print for a number of years, although copies are occasionally available on ebay. 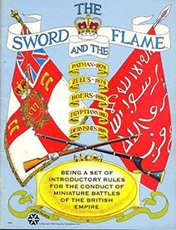 Sword and Flame: First introduced in 1979, The Sword and Flame is a colonial set of rules covering from the French Indian wars (1740s) up to the Boxer Rebellion (1900).  A relatively simple fast moving and fun game to play. Gamers move their figures in units of 20 infantry men, 12 figures for cavalry, using regular playing cards to determine order of movement. 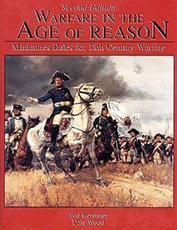 Warfare in the Age of Reason:  Rules for 18th century Warfare.  Easy to learn, but has in-depth mechanics that portray the fighting styles of the period. So simple to play that all is needed are the quick reference sheets that come with the rules.   Tactical, Campaign or Siege sections can be used together or separately. Covers the periods between the War of Austrian Succession to the American War of Independence. The rules stress the tactics used in the Age of Reason using 6 sided dice, just add, subtract and roll. Sit in on a game and before it ends you will understand the rule system -- its that easy. 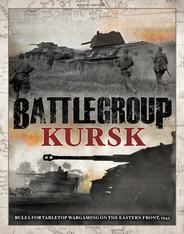 Battlegroup:  Battlegroup Kursk rules offer solid mechanics and comprehensive statistical data on armour, equipment and troop types.  An innovative games system for re-creating the epic battles around Kursk in 1943 on the Eastern Front.  These fast, fun and authentic-feeling rules, written by veteran games designer Warwick Kinrade (author of Kampfgruppe Normandie), are played at Trumpeter Society events in 15mm scales.  Extensively researched background and comprehensive equipment data with a comprehensive modelling and painting guide section.  Each volume focuses on a specific battle such as Kursk (history's biggest tank battle in 1943) and 1944's Normandy campaign. 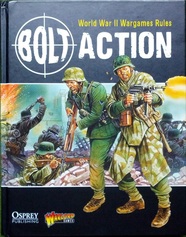 Bolt Action: Bolt Action offers World War II gaming at the squad level, with each side fielding about 30-50 soldiers and perhaps a handful of tanks or vehicles. Rules are fairly clean and easy to master although some players feel tank stats are somewhat over-simplified. The core book offers statistics for many vehicles and troop types in most European fronts. 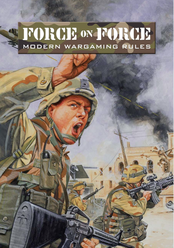 Force on Force: For those interested in recent or contemporary insurgency conflicts, Force on Force delves into all aspects of modern operations from supply to air support. At its core, naturally, the rules focus on those ground forces conducting operations. 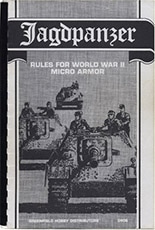 Jagdpanzer:  Straightforward and uncomplicated rules for WWII armoured combat. The anti-tank combat is a simply system that provides decent, realistic results.  The basic rules are very basic, but there are several optional rules that can add chrome.  The scale of the game is 1 inch = 25 metres, 1 turn = 1 minute, and the figure scale is 1:1 for tanks and guns with infantry representing squads, all designed for larger actions.  The rules can be used for micro-armour all the way up to 15mm scale. The rule booklet combines the rules with a great deal of organizational data and many pages of data on every AFV, gun, and airplane that was used in WWII.  The rules utilizes a novel movement system that is either loved or hated, but also comes with an alternative system. These rules are available occasionally on ebay. 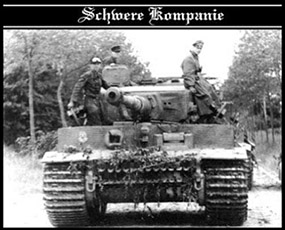 Schwere Kompanie: This game is designed for company sized battles where one miniature represents one squad, vehicle or gun. These rules attempt to reduce the use of counters and markers so as not to detract from the visual aspects of the game. To purchase a copy of these rules, go to: HERE 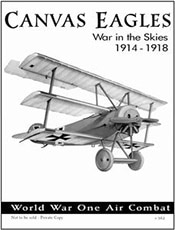 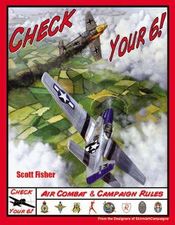 Check your 6!:  You can take to the skies for air combat missions from 1925 to 1947. All "pilots" plot their moves using your plane & pilot stats and then all planes are moved simultaneously over a large map board.  The Trumpeter society plats Check Your 6! using 1/285th scale aircraft models. 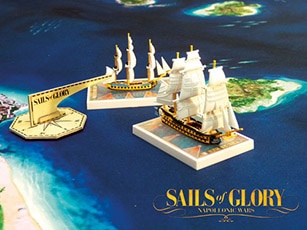 Sails of Glory: Based on the Napoleonic era of sail, Sails of Glory pits ready to play -out of box ships in Naval battles. All supplied by the same company that gives you Wings of Glory. A good game to play when space is limited and you have a relatively short time to game. 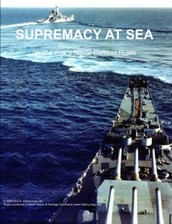 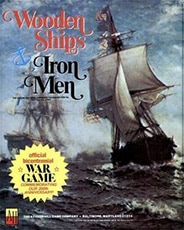 Wooden Ships and Iron Men:  Fighting ships in the age of sail!  This is a hex based wargame, originally published in 1974, is played using 1/1200 scale ships covering the era around the late 18th century. Emphasis is placed upon wind direction for maneuverability. The rules also extend into boarding actions making the game “up close and personal”. 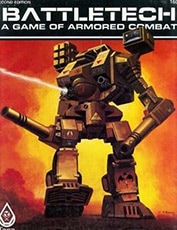 Battletech:  An older, originally published in 1984, but still trendy set of rules. This is a hex based game, the game surface needs to have hexes, where humanoid armoured combat units called Battlemechs do battle against each other. Generate your own units and field them in combat. 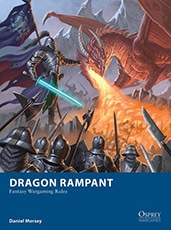 Dragon Rampant:  Developed from the popular Lion Rampant system, Dragon Rampant is a standalone wargame that recreates the great battles of Fantasy fiction. Scenarios, army lists, and full rules for magic and monsters give players the opportunity to command unruly orc warbands, raise armies of the undead, campaign across an antediluvian world as the warchief of a barbarian tribe, or exploit the power of mighty creatures and extraordinary sorcery.
An army usually consists of 6-8 units comprised of 6-12 individually based figures. These small units move and fight independently, assuming that they follow your orders rather than just doing their own thing. Command and control is just as important on the battlefield as the power of a troll chieftain or the magic of an archmage. 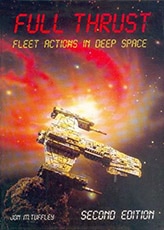 Full Thrust:  The Tactical Starship Combat Rules!  Simple, fast-play rules that can be used with any size of Star Fleet! Basic rules of play can be learned in just a few minutes! No referring to charts or tables required during play!  Construct your own ships, or chose to buy them on point cost basis. This set of rules is based on 6 sided dice.  Full Thrust is fast paced giving a victory within 3 to 4 hours of playing time.  A balanced fleet is critical for success as ships die quickly. 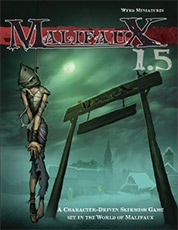 Malifaux: Set on an alternative earth. Using a wild west theme Malifaux presents a magical world of monsters, gunslingers, necropunks and man-machine hybrids. A miniatures skirmish game.  Malifaux is a skirmish miniature game in a horror/steampunk setting.  Each player builds a force of 5-7 figures from a faction to battle it out. A force is composed of minions and at least one master.  Malifaux involves elements of resource management as hands of cards are used instead of dice to resolve skill checks.  Each check involves drawing a card from a deck and adding it to a figure's statistic. Players can then use cards from  their hands to raise the value. The highest value in an opposed check wins.  The turn system is integrated, with each player alternating turns between model activations. 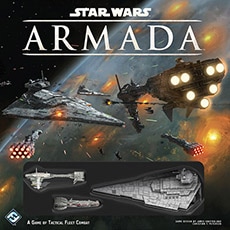 Star Wars: Armada:  In Star Wars: Armada, you assume the role of fleet admiral, serving with either the Imperial Navy or Rebel Alliance. You assemble your fleet and engage the enemy. Using the game’s unique maneuver tool, you steer your capital ships across the battlefield, even while squadrons of starfighters buzz around them. Then, as these ships exchange fire, it’s your job to issue the tactical commands that will decide the course of battle and, perhaps, the fate of the galaxy.

To have the Games Schedule sent to you via email, please make a request for the Trumpeter Email News Service by sending an email request to:  gamesmaster@shaw.ca
Powered by