Introduction: Napoleon was renowned for winning snowball fights as a young cadet in military school. This later winter battle was a much grimmer struggle of massed batteries and cavalry charges.

By Thomas J Moore
On Saturday November 16, 2013, The White Rock Gamers with two North Shore Gamers in attendance, played the Battle of Eylau.

This historic Napoleonic battle occurred on February 8, 1807, between the French forces of Napoleon Bonaparte and the Russian Army under the command of Count Von Benningsen.

The actual battle occurred during a very cold snowy period, with frequent snowstorms and flurries. To simulate this we decided to roll dice every turn to determine what the weather was to be: blizzard, flurries or clear, each state being incrementally detrimental to firing and movement. 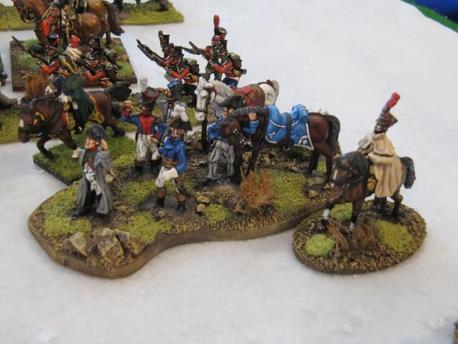 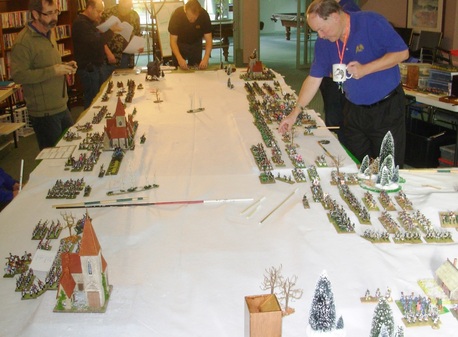 The first number of turns started the game with Blizzard conditions, no firing beyond 9 inches and rolling a die for maneuver for every battalion or regiment. French deployed on left with Eylau village in centre of the action. 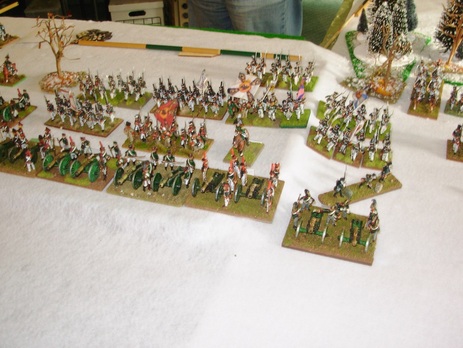 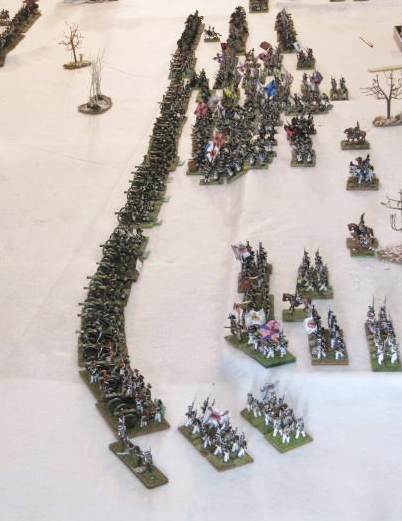 The Russian commander decided to break from history and attack on all fronts. Historically the Russians massed 400 guns at the battle, and in our game the Russians set up a grand battery in their centre to try and break the French centre or set fire to the village of Eylau. (Yes, there are over 20 Russian batteries supported by horse and foot!) 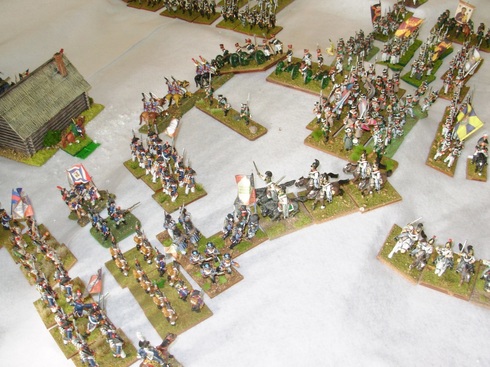 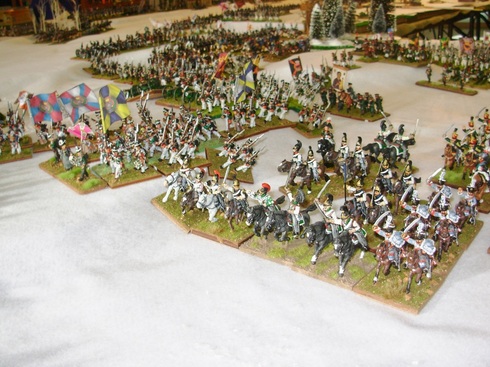 The Russian left wing aggressively attacked Davout’s Corps which was just arriving on the table, division by division. Davout managed to hold off the Russians losing the greater portion of Friant’s Division, eventually destroying 3 large Russian Divisions – including one of heavy cavalry shown here. 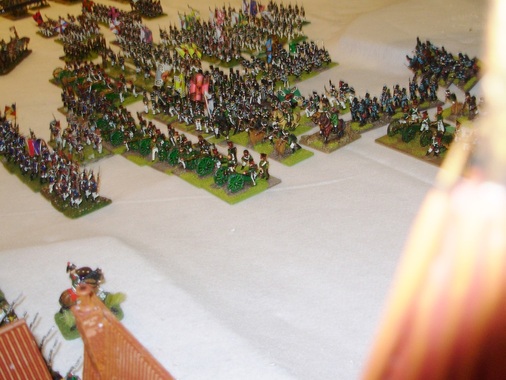 The Russian Grand battery advanced into the open and came under attack by French heavy cavalry, losing a number of batteries to their constant charges. Brave Russian infantry moved forward to support their guns and formed square, causing severe losses to the French heavy cavalry, eventually destroying the Cuirassier division of Hautpoul. 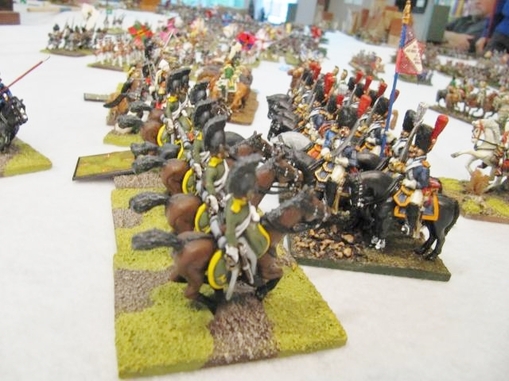 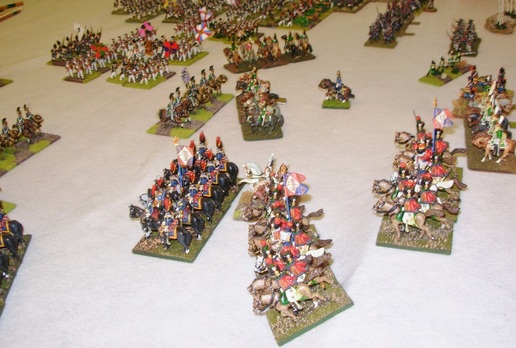 The Russian right wing advanced boldly and destroyed 3 small French light cavalry divisions. Continuing their advance, the battle hardened Russian Dragoons crossing swords on the finest of French cavalry, the Guard Grenadiers and Elite Chasseurs a Cheval of the guard. 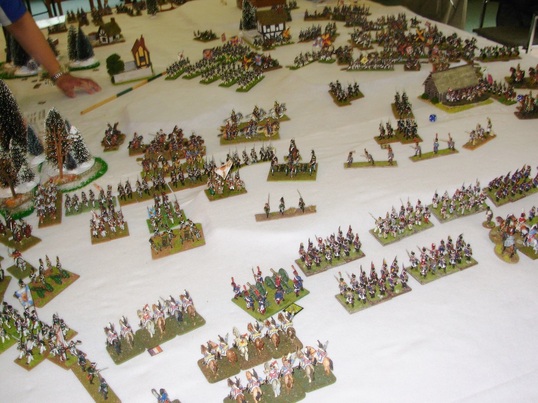 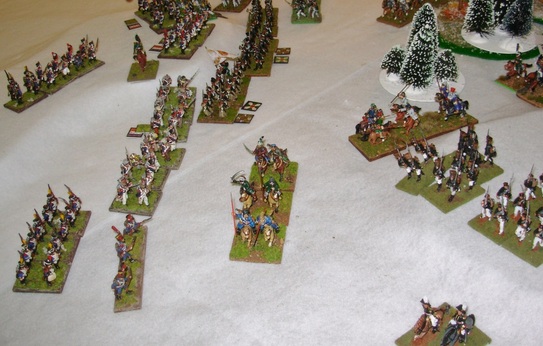 The Russian Dragoons once again prevailed, destroying all the Guard cavalry, however their division was destroyed in the process. French infantry on the left wing of Soult’s Corps could not withstand the attack with three more divisions being decimated. 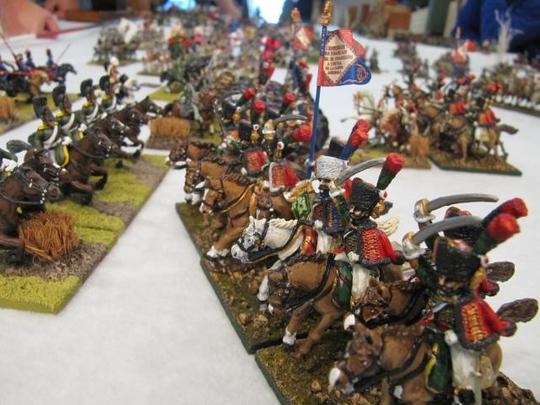 By the time night fell at turn 18 there were 8 French divisions and 4 Russian destroyed. 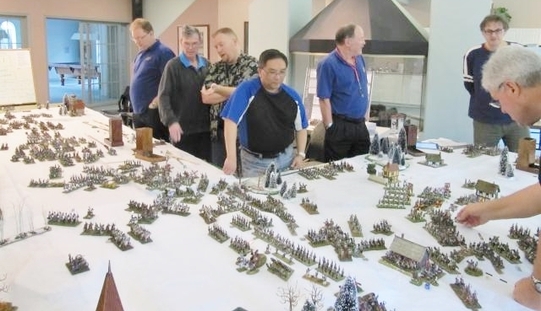 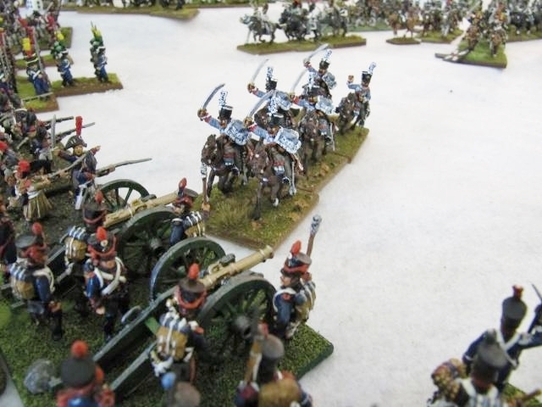 The total number of battalions and regiments removed from the game were almost identical, because the Russian divisions are much bigger than the French. However the Russians lost over 20 batteries of artillery.

The game ended at turn 18 at 5:30 pm. The actual battle continued until approximately 10 pm but, we decided to pack it up and go eat by then.

A great time was had by all with much laughter, wonderful fun and friendship.